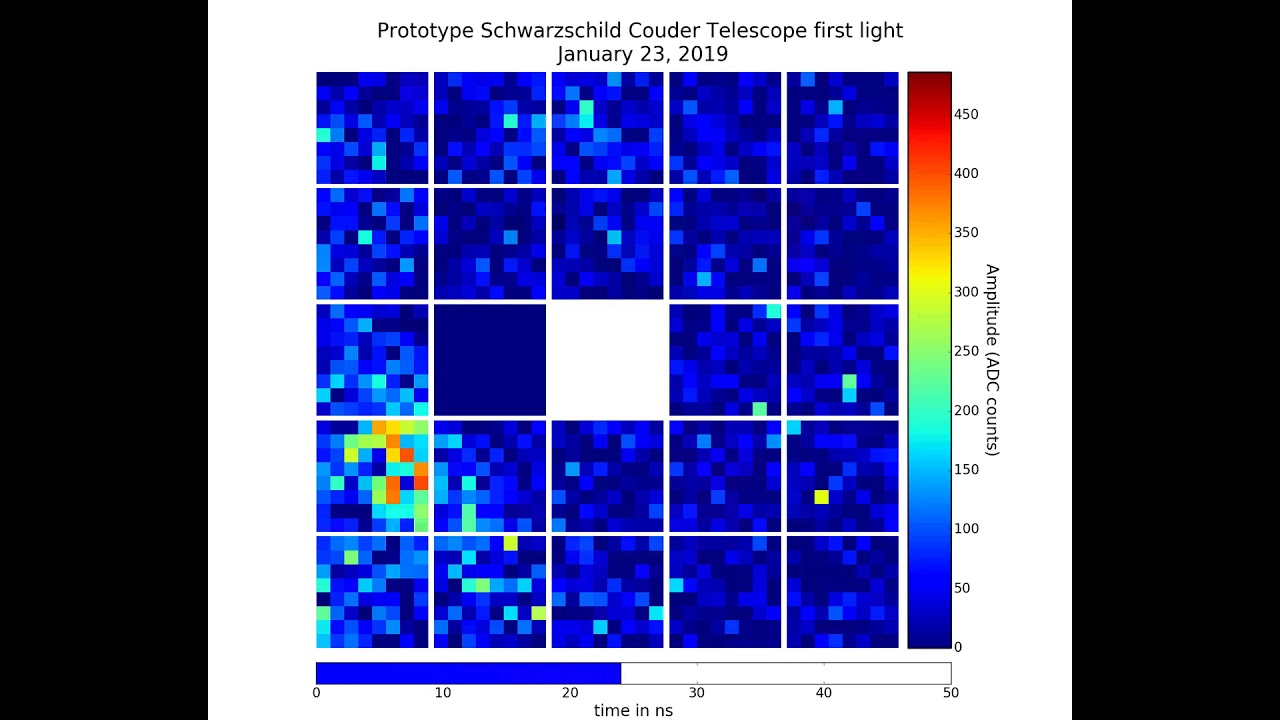 Amado, AZ - Less than a week after its inauguration on 17 January 2019, the prototype Schwarzschild-Couder Telescope (pSCT), a prototype telescope proposed for the Cherenkov Telescope Array (CTA), successfully detected its first Cherenkov light on January 23 at the Fred Lawrence Whipple Observatory in Arizona. A dual-mirrored Medium-Sized Telescope, the SCT is proposed to cover the middle of CTA’s energy range (80 GeV – 50 TeV).

The week following the inauguration, the camera was operated for the first time with the mirrors uncovered in a commissioning test run. During the first few minutes of this “first light” run on the evening of January 23, cosmic-ray-induced Cherenkov air shower events were identified in the raw, uncalibrated camera data. Follow the link below to the official CTA announcement to see videos of the data from two events captured during the "first light" run.

Cherenkov light is the result of a gamma ray or cosmic ray from an astrophysical source interacting with the Earth’s atmosphere. The flash of bluish light only lasts a few billionths of a second and is extremely faint. Gamma-ray telescope cameras are sensitive to these faint flashes. The pSCT camera triggers when several neighboring pixels detect light within a few nanoseconds of one another. The camera has a modular design, with 25 modules each containing 64 pixels. The central module is not yet installed in order to shine a laser beam along the central axis for telescope alignment, and a neighboring module was disabled during the test run. The pixel amplitudes are raw and uncalibrated, but the early results are a major milestone for the SCT team.

Text (with minor modifications) from the official CTA Press Release 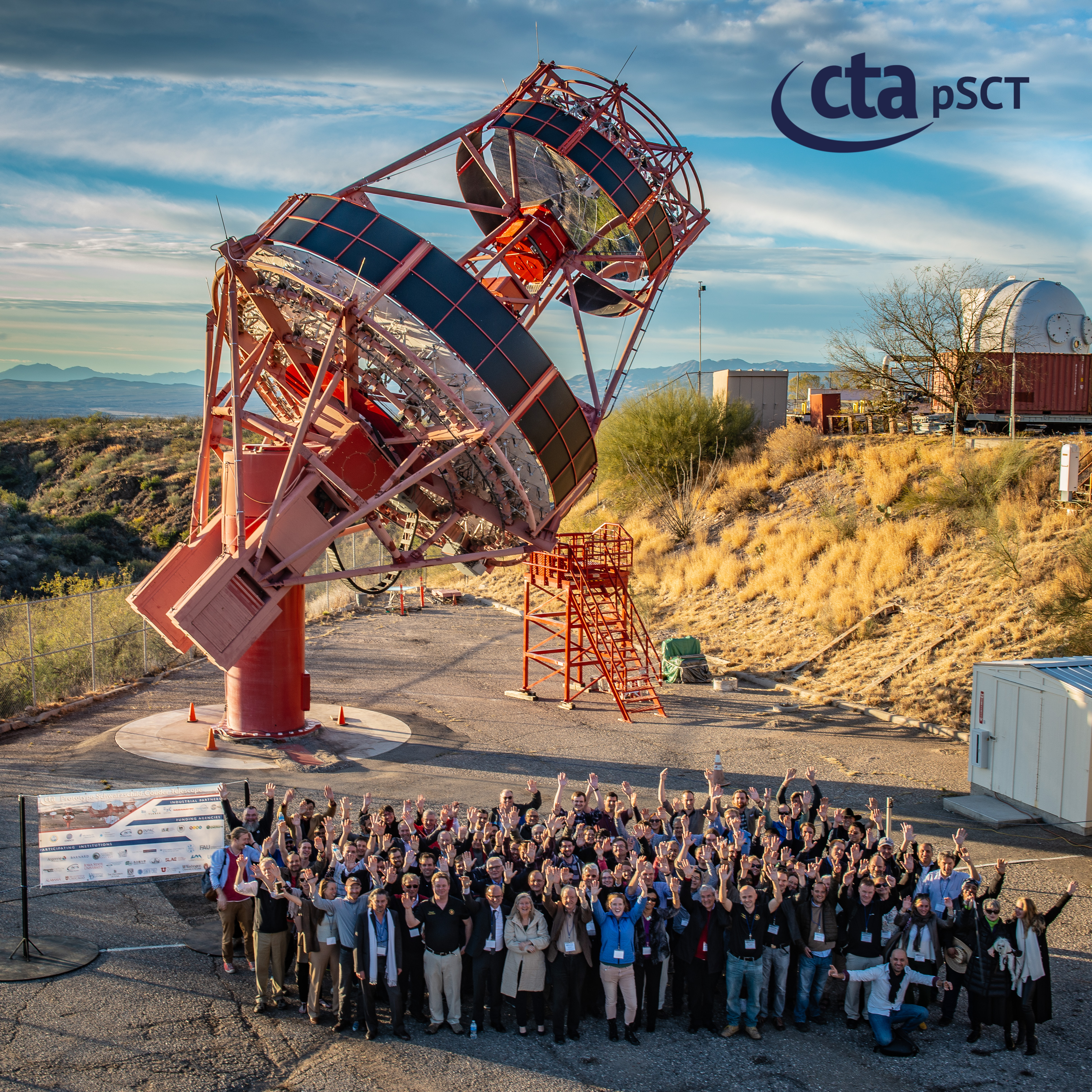 Amado, AZ - Expected to see first light in early 2019, a prototype Schwarzschild-Couder Telescope (pSCT) for gamma-ray astronomy will be unveiled in a special inauguration event on January 17, 2019 at the Center for Astrophysics | Harvard & Smithsonian, Fred Lawrence Whipple Observatory (FLWO) in Amado, Arizona.

Exploiting a novel optical design, the 9.7-m aperture pSCT is a pathfinder telescope for use in the next-generation very-high-energy gamma-ray observatory, the Cherenkov Telescope Array (CTA), for which construction will begin in 2019.

"The inauguration of the pSCT is an exciting moment for the institutions involved in its development and construction," said CTA-US Consortium Chair David Williams, a professor of physics at the University of California, Santa Cruz. "The first of its kind in the history of gamma-ray telescopes, the SCT design is expected to boost CTA performance towards the theoretical limit of the technology."

The SCT's complex dual-mirror optical system improves on the single-mirror designs traditionally used in gamma-ray telescopes by dramatically enhancing the optical quality of their focused light over a large region of the sky, and by enabling the use of compact, highly-efficient photo-sensors in the telescope camera.

"Ultimately, the SCT is designed to improve CTA's ability to detect very-high-energy gamma-ray sources, which may also be sources of neutrinos and gravitational waves," said Prof. Vladimir Vassiliev, Principal Investigator, pSCT. “Once the SCT technology is demonstrated at FLWO, it is hoped that SCTs will become a part of at least one of the two CTA arrays, located in each of the northern and southern hemispheres."

The CTA Observatory (CTAO) will consist of 118 telescopes of three different sizes, and is expected to detect sources of gamma rays in the energy range 20 GeV to 300 TeV with about ten times increased sensitivity compared to any current observatory. Notable for providing improved gamma-ray angular resolution and its very-high-resolution camera (>11,000 pixels), the SCT is proposed for the medium-sized CTA telescopes, and will primarily contribute to the middle (80 GeV – 50 TeV) of CTA's energy range.

"The SCT and other telescopes at CTA will greatly improve upon current gamma-ray research being conducted at HAWC, HESS, MAGIC, and VERITAS, the last of which is located at the Fred Lawrence Whipple Observatory," said Dr. Wystan Benbow, Director, VERITAS. "Gamma-ray observatories like VERITAS have been operating for 12 to 16 years, and their many successes have brought very-high-energy gamma-ray astronomy into the mainstream, and have made many exciting discoveries. We hope CTA will supersede VERITAS around 2023, and it will be used to continue to build upon the 50 years of gamma-ray research at the Whipple Observatory and elsewhere."

Text from Center for Astrophysics, Harvard and Smithsonian press release.